Curious Alice VR: We Can All be Alice In Virtual Reality 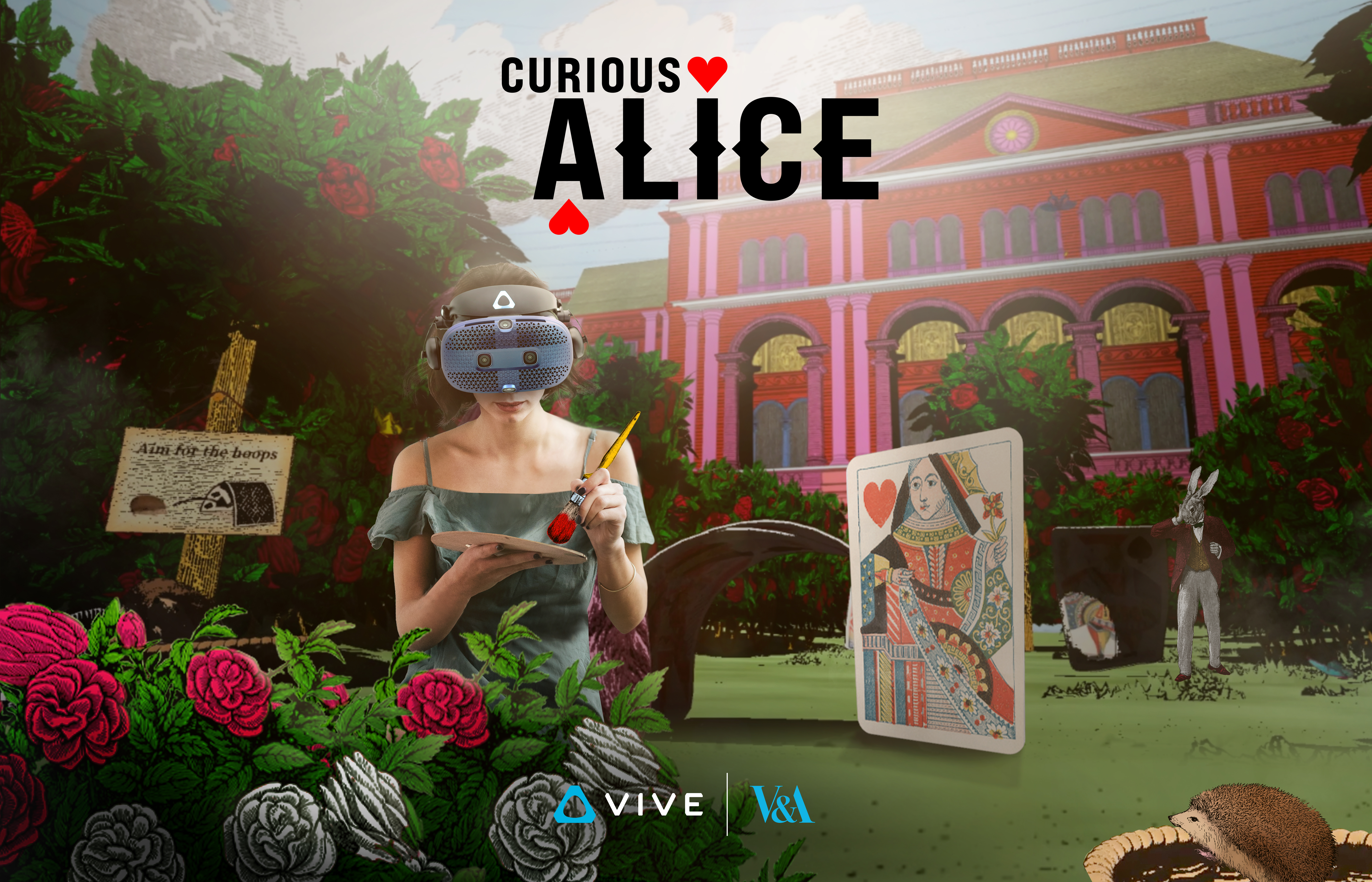 In previous cooperations with the Louvre to commemorate the 500-year anniversary of the death of Leonardo da Vinci, VIVE Arts brought the story of the Mona Lisa to life with VR.

This year VIVE Arts partnered with the V&A Museum, the VR game studio PRELOADED, and the VR platform ENGAGE on the major 2021 exhibition 'Alice: Curiouser and Curiouser' to present Curious Alice VR game.

Curious Alice VR not only tells the story of the classic English novel Alice’s Adventures in Wonderland, but it also lets people visit the wondrous world with the help of Virtual Reality.

VIVE Arts then turned her astonishing works into an interactive VR game for the audiences to explore.

Alice: Curiouser and Curiouser’ will open to the public at the V&A in London in Summer 2021. Tickets are on sale now.

We at VIVE also invite all the audiences around the world to experience Curious Alice VR game through the VR communication platform ENGAGE.

VIVE Arts will take you into an enchanted world, where you can start a series of magical adventures in Virtual Reality.

For a bit of background, the Victoria and Albert Museum was renamed after Queen Victoria and her husband Prince Albert.

The author and illustrator of Alice’s Adventures in Wonderland Lewis Carroll and John Tenniel were also people of the Victorian era.

For that, the Icelandic illustrator Kristjana Williams used traditional Victorian engravings to create a three-dimensional paper theatre and bring the atmosphere of the Victorian era to the audience in Curious Alice VR. 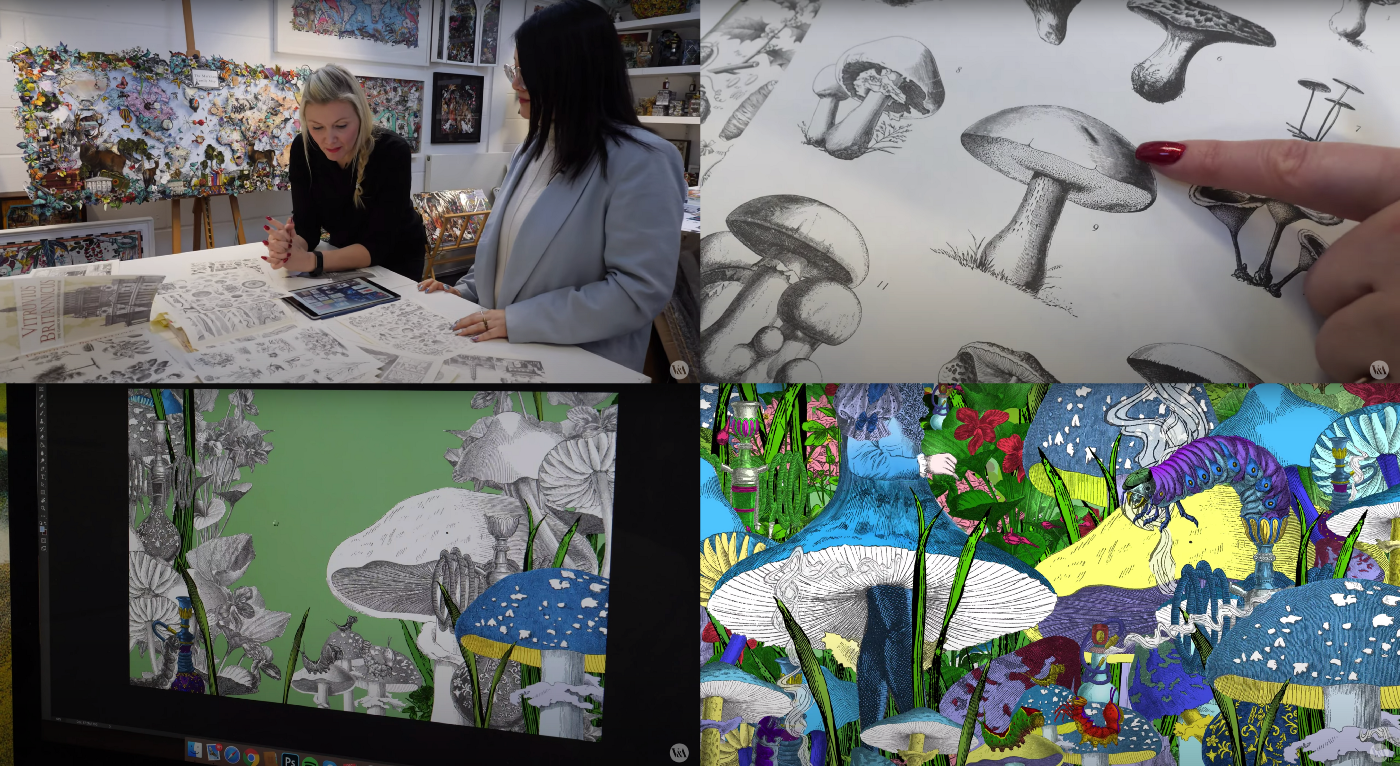 Because of Virtual Reality, we are not just reading about Alice. We become Alice.

The Author-reader relationship is crucial because it affects how the reader experiences the world that the author creates.

Authors create stories and deliver them to audiences through the storytelling medium.

The medium can be plain text, illustration, music, opera, movie, video game, and even VR. 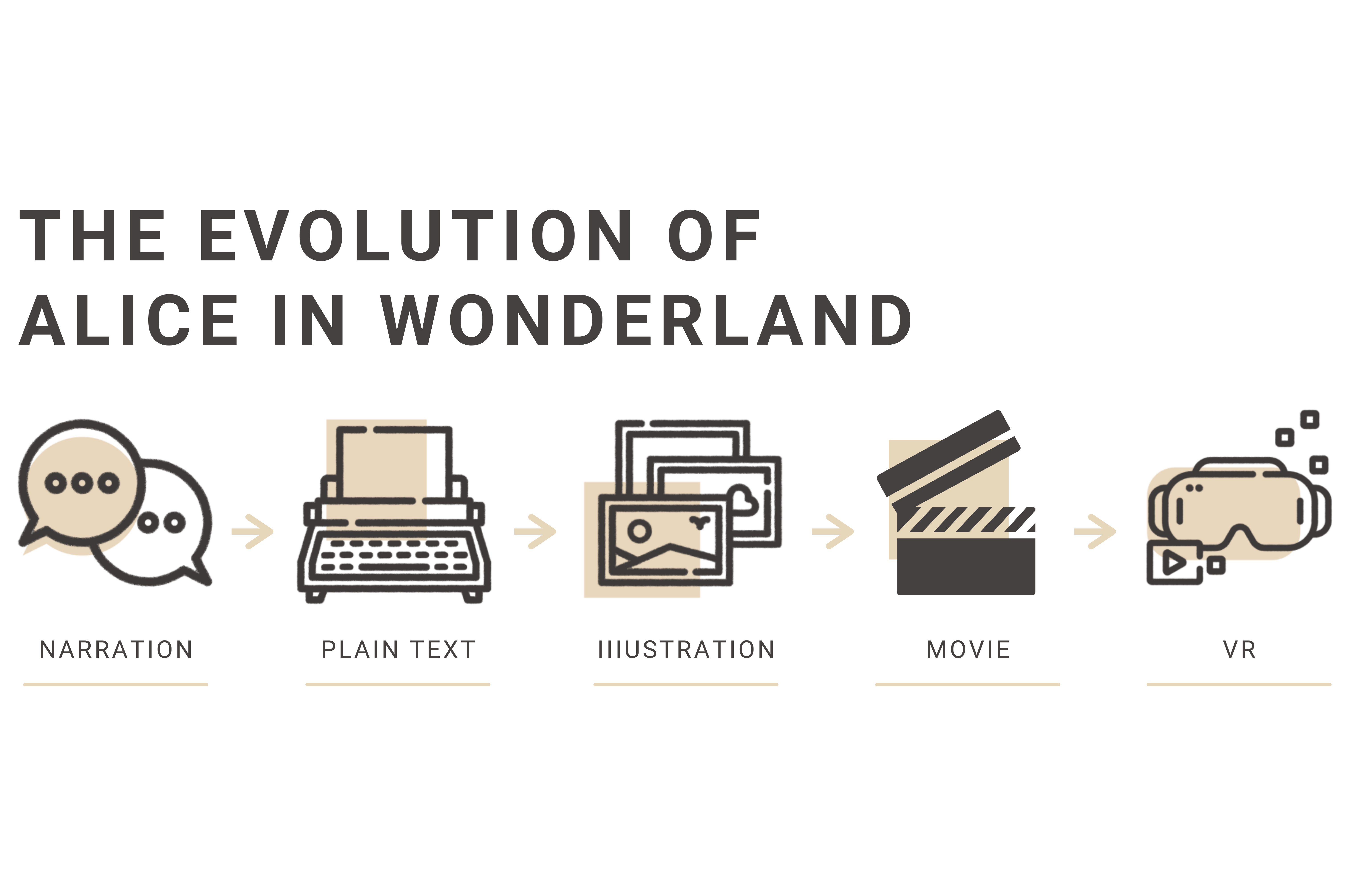 From Plain Text to VR: The Evolution of Alice in Wonderland[/caption]

As message recipients, audiences can't interact with the story. They are bystanders observing the happenings in the story.

Sometimes the audience can be “intruders” in the storytelling when the character in the story breaks the fourth wall and interacts with them.

Nowadays, some innovative solutions even allow people to comment and vote for character action decisions on social media, which gives them the power to influence the story.

But from a pure story standpoint, there is no story like Alice's Adventure in Wonderland. 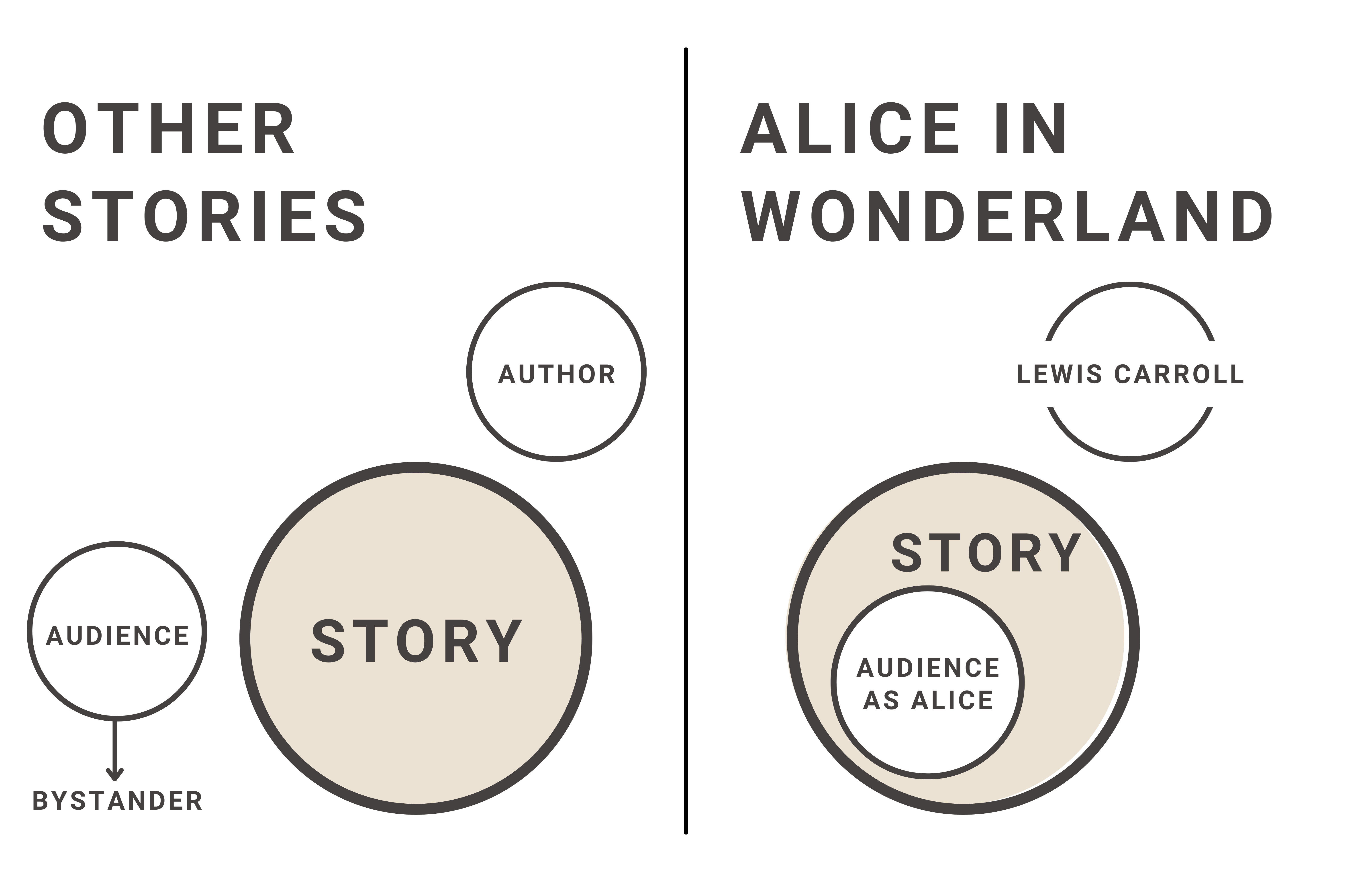 Because the story's first-ever audience Alice Liddell is the main character.

This unique author-reader relationship is one of the reasons why the story is so engaging.

It all started on a beautiful afternoon in the late 19th century, where a young mathematician Lewis Carroll and three young ladies of the Liddell family went for a picnic on a boat.

As they rowed along the Thames, 10-year-old Alice Liddell asked Carroll for a story. To entertain the young ladies Carroll came up with the adventure of Alice.

The young girl was fascinated by the story and ask Carroll to write it down for her.

Accepting the request, Carroll added more details to the story and gave the manuscript to the young girl as a gift.

Carroll eventually published the book with the help of a prominent political cartoonist John Tenniel to illustrate the magical adventure of Alice.

For Alice Liddell, the book was not only a story but a tailored game - a game that each and every individual who reads the story can experience. Instead of being bystanders, the audiences can imagine themselves as Alice and go on their own adventures in Wonderland. 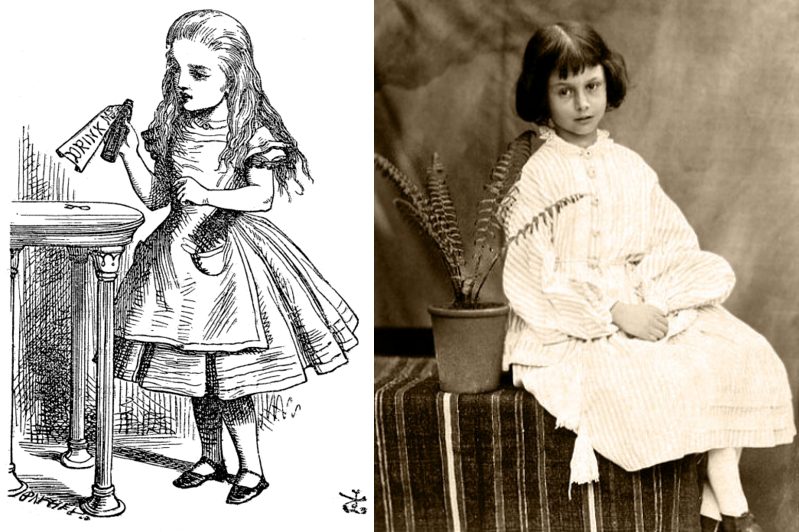 But, why imagine when you can become Alice in VR.

With the help of VR, VIVE Arts introduces the audiences to the strange and unusual world of Wonderland. Making it possible for the audiences to solve riddles and overcome challenges from a first-person perspective.

VIVE Arts welcome you to immerse yourselves in this adventurous story and unleash your creativity.

Let’s go back in time. Onboard the boat of Lewis Carroll and row along the Thames.

Let’s become Alice, follow the white rabbit and find its missing glove, solve the caterpillar's mind-bending riddles, visit the Red Queen's croquet garden, and compete in an unfair game with the Red Knights.

We are excited to have you experience more classic moments in Curious Alice VR game. 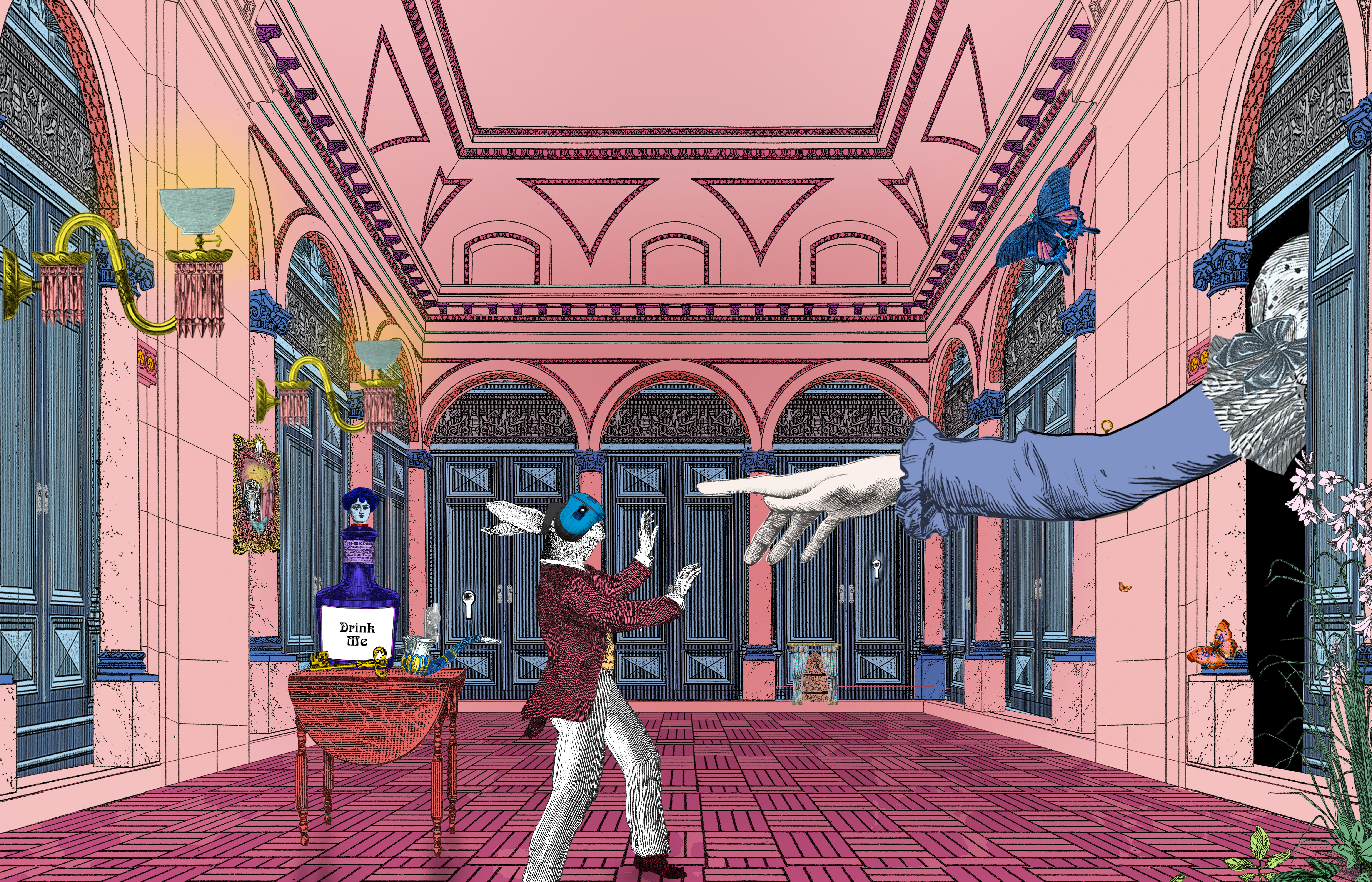